The Ultimate Guide to the AIP Diet

If you have an autoimmune disease, the autoimmune protocol diet may help you manage your symptoms. Here’s what the AIP diet is and how it might benefit you. 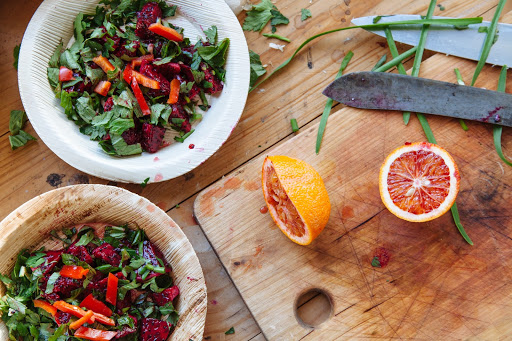 In the last decade, the autoimmune protocol (AIP) diet has gained significant popularity, with more and more people adopting it to help treat their autoimmune conditions. Proponents of the diet claim it also helps them improve their energy levels and feel better.

But are these benefits scientifically proven? And is the protocol safe?

In this article, we'll dive into the basics of the autoimmune protocol diet, including what it is, what foods are included in the diet, and what to expect when you go on the protocol.

Where Did the AIP Diet Come From?

The AIP diet is the natural outgrowth of decades of thought about how our modern diet impacts our health.

In 1975, gastroenterologist Walter L. Voegtlin published a book called The Stone Age Diet. Dr. Voegtlin believed that humans evolve too slowly to keep up with rapid changes in our environment. This idea, known as the evolutionary discordance hypothesis, posits that while the modern diet has changed greatly, genetically our bodies are stuck in the Stone Age, or Paleolithic era. According to this hypothesis, for optimum health we should eat the way our ancient ancestors did.

The autoimmune protocol diet is considered an offshoot of the paleo diet. It is designed to remove foods that can trigger an immune system response, possibly leading to inflammation and autoimmune disease.

What Is the AIP Diet?

The autoimmune protocol diet is an extension of the paleo diet with an autoimmune twist. Similar to the paleo diet, the AIP diet has an initial elimination phase, in which food groups that are considered problematic are removed from the diet.

The Three Phases of the AIP Diet

The AIP diet is intended to be broken down into three phases: elimination, reintroduction, and maintenance (also known as personalization).

During the initial phase foods, food additives, and medications that may cause inflammation, allergic reactions, or imbalance in the gut microbiome (dysbiosis) are eliminated from the diet. Many of these foods are implicated in inflammatory bowel disease (IBD). (Source)

This phase involves systematic reintroduction of eliminated foods to allow the individual to identify unique food groups that cause their symptoms and aggravate diseases, and to see which food groups are problematic for them. (Source)

This process is also called an elimination-provocation challenge. After the challenge is completed, the individual will have a list of their most problematic foods, or triggers. Avoiding these triggers may help alleviate disease symptoms.

Once trigger foods have been identified, a long-term diet that helps avoid intestinal inflammation and other symptoms can be planned. Because the diet is tailored to the individual’s needs, some practitioners refer to this phase as the “personalization” phase instead. (Source)

Why Do the AIP Diet?

The AIP diet may be helpful for people with autoimmune diseases. The main goal of the diet is to nourish the body and improve its ability to heal itself. Like the paleo diet, the AIP diet emphasizes whole foods and nutrient-dense sources of carbohydrates, fats, and protein.

The AIP diet also places a strong emphasis on antioxidants and anti-inflammatory foods. It is possible this lifestyle intervention may prevent the need for medications for some autoimmune conditions.

What Is the Connection Between Autoimmune Disorders and the AIP Diet?

Autoimmune disorders occur when your immune system mistakenly attacks your own body, causing inflammation that can damage tissues and organs. Autoimmune disorders can occur at any age and affect both males and females, but they are most common in women. Although the exact cause of autoimmune disorders is unknown, it is thought that genetics, environmental factors, and lifestyle choices play roles. (Source)

One environmental factor — and lifestyle choice — that is under your control is your diet. Following the AIP diet may help you manage your autoimmune disease symptoms. (Source)

How Does the AIP Affect Autoimmune Diseases?

There is evidence to suggest the AIP diet may help alleviate symptoms, improve quality of life, and promote healing in people with autoimmune disease. Studies report that some participants notice positive changes within the first four weeks of the elimination diet. (Source)

Following the AIP diet may be beneficial for these autoimmune diseases:

What Are Foods to Avoid During the Elimination Phase?

The first phase of the AIP diet requires elimination of a large number of foods that are part of a typical Western diet. Included are foods that may be pro-inflammatory, may upset the balance of the gut microbiome, or are common allergens. Many of these foods are also highly nutritious and are recommended in the maintenance phase of the AIP diet for those who can tolerate them.

The food groups included in the AIP elimination phase, and the rationale behind each, are as follows:

Legumes: Lentils, beans, peas, peanuts. Legumes are high in lectins and saponins, substances that are commonly consumed in a wide variety of foods. They are excluded during the AIP elimination phase because research suggests they have the ability to harm cells that line the intestinal tract and upset the balance of the microbiome. (Source, Source)

Grains: Rice, wheat, oat. Grains are considered to have the same kind of potentially harmful effects as legumes and are included in the elimination phase for the same reasons.

Nightshade vegetables: Eggplants, peppers, potatoes, tomatoes. Citrus and nightshade vegetables are suggested to generate sensitivities in large proportions of the population. Eggplants, tomatoes, and potatoes may contain solanine, which may increase intestinal permeability and be detrimental to certain diseases. (Source, Source)

Dairy: Choline and carnitine, which are present in dairy, are metabolized by the bacterium Prevotella copri into pro-inflammatory substances. (Source)

Eggs: Choline and carnitine are also present in eggs. Furthermore, eggs are high in fat. A high-fat diet has been shown to have a detrimental effect on autoimmune diseases. (Source)

Nuts and seeds. Nuts and seeds have many nutritional benefits, but allergies to them are common enough that they naturally have a place in an elimination diet. Many people are able to successfully reintroduce at least some nuts and seeds to their diet.

Highly-processed industrial seed oils. It’s well known that omega-3 and omega-6 fatty acids are good for health, but an unbalanced ratio of the two kinds is believed to be pro-inflammatory. Unprocessed oils with a healthier omega-3 to omega-6 ratio can be added back to the diet during the reintroduction phase. (Source)

Food additives: Emulsifiers, thickeners, stabilizers. The effects on the intestinal tract of common additives including guar and xanthan gums, carrageenan, and lecithin have been studied for years with few hard conclusions. A new study in the journal Microbiome reports evidence that many emulsifiers have detrimental effects on the gut microbiome and promote intestinal inflammation. (Source)

Alcohol. Studies have found alcohol may both encourage growth of harmful microbes in the gut and disrupt the intestinal lining. (Source, Source) Alcohol intoxication also increases the risk of IBD. (Source)

Refined or processed sugars such as white sugar and brown sugar. Consumption of processed sugars has long been shown to contribute to inflammation and chronic conditions such as heart disease and obesity, but more recently it has been correlated with exacerbation of autoimmune diseases such as lupus. (Source)

Navigating trigger foods can be an overwhelming and frustrating process. Our Nutritional Therapy Practitioners can help guide you through the elimination process and together with your health care practitioner, you can get a personalized lifestyle plan to improve your quality of life.

What Are the Best Foods for the AIP Diet?

The foods included in the AIP diet are intended to maximize nutritional value while minimizing autoimmune and inflammation triggers. Some of these foods are eliminated in the first phase of the diet and are recommended in the maintenance phase only for those who have successfully reintroduced them.

Vegetables (except for nightshades), algae, and fresh fruit. Fruits and vegetables are high in fiber, which helps control blood pressure, blood sugar, and cholesterol. However, too much fiber intake may lead to low absorption of nutrients. Polyphenols, especially flavonoids, are bioactive components found in fruits, vegetables, tea, and red wine that have a beneficial impact on gut microbiota. (Source)

High-quality animal and seafood proteins. In the context of the AIP diet, meat is considered nutritionally dense with a healthy ratio of omega-3 and omega-6 fatty acids. It is recommended to choose beef, bone broth, and organ meats from grass-fed animals, and to avoid processed meats, which may contain additives.

Fermented foods and beverages. Microbial activity helps increase the bioavailability of nutrients in fermented foods. They are especially rich in probiotics, which help keep the gut microbiome healthy and may help reduce inflammation. (Source, Source)

Green and black tea. Green tea and its active ingredient, EGCG (epigallocatechin-3-gallate), are anti-inflammatory and have been shown to improve symptoms and decrease the severity in animal models with autoimmune disease. (Source)

Nuts and seeds. Frequent nut consumption is associated with a lower profile of inflammatory biomarkers, such as C-reactive protein, IL-6, and fibrinogen. Although nuts and seeds are avoided during the elimination phase of the AIP diet, if you’re not allergic you may be able to reintroduce them. (Source)

Is the AIP Diet Effective?

More studies are needed to fully investigate the influence of a Paleolithic-style diet, but the research done so far suggests that, overall, the diet can have a positive effect on health.

The paleo diet can elevate levels of HDL, the “good” cholesterol. HDL is known to have antioxidative and anti-inflammatory effects that help protect against autoimmune and other diseases. (Source)

The AIP diet may also help heal a leaky gut, which arises from increased permeability of the intestinal epithelial lining. A leaky gut may allow bacteria and other unwanted substances to pass from the intestines into the bloodstream, leading to an autoimmune reaction. This can then be treated with antibiotics or the AIP diet. (Source, Source)

Is the AIP Diet Safe?

The AIP diet is safe overall, given that its aim is to cut out foods that are inflammatory triggers. However, the large numbers of foods that are excluded mean there are some concerns to be aware of.

Increased saturated fats. Research has shown that high saturated fat intake can be problematic, especially in certain populations. However, moderate fat intake, as is encouraged with the AIP framework, is also beneficial for the absorption of the fat-soluble vitamins A, D, E, and K. (Source, Source)

The Bottom Line on the AIP Diet

The AIP diet, which is more restrictive than the paleo diet, is meant to help reduce inflammation and symptoms of autoimmune diseases. After the elimination and reintroduction phases of the diet, a personalized diet plan can be designed that suits individual needs. More research into the efficacy of the AIP diet for managing autoimmune symptoms is needed, but studies so far show promise. Our Nutritional Therapy Practitioners can help you determine whether the AIP diet is right for you — explore our high-touch care pathways here.