Does Turkey Make You Sleepy? Debunking the Thanksgiving Myth

Does turkey make you sleepy? Turkey allegedly causes drowsiness because it is packed with the amino acid tryptophan, one of the building blocks of protein. 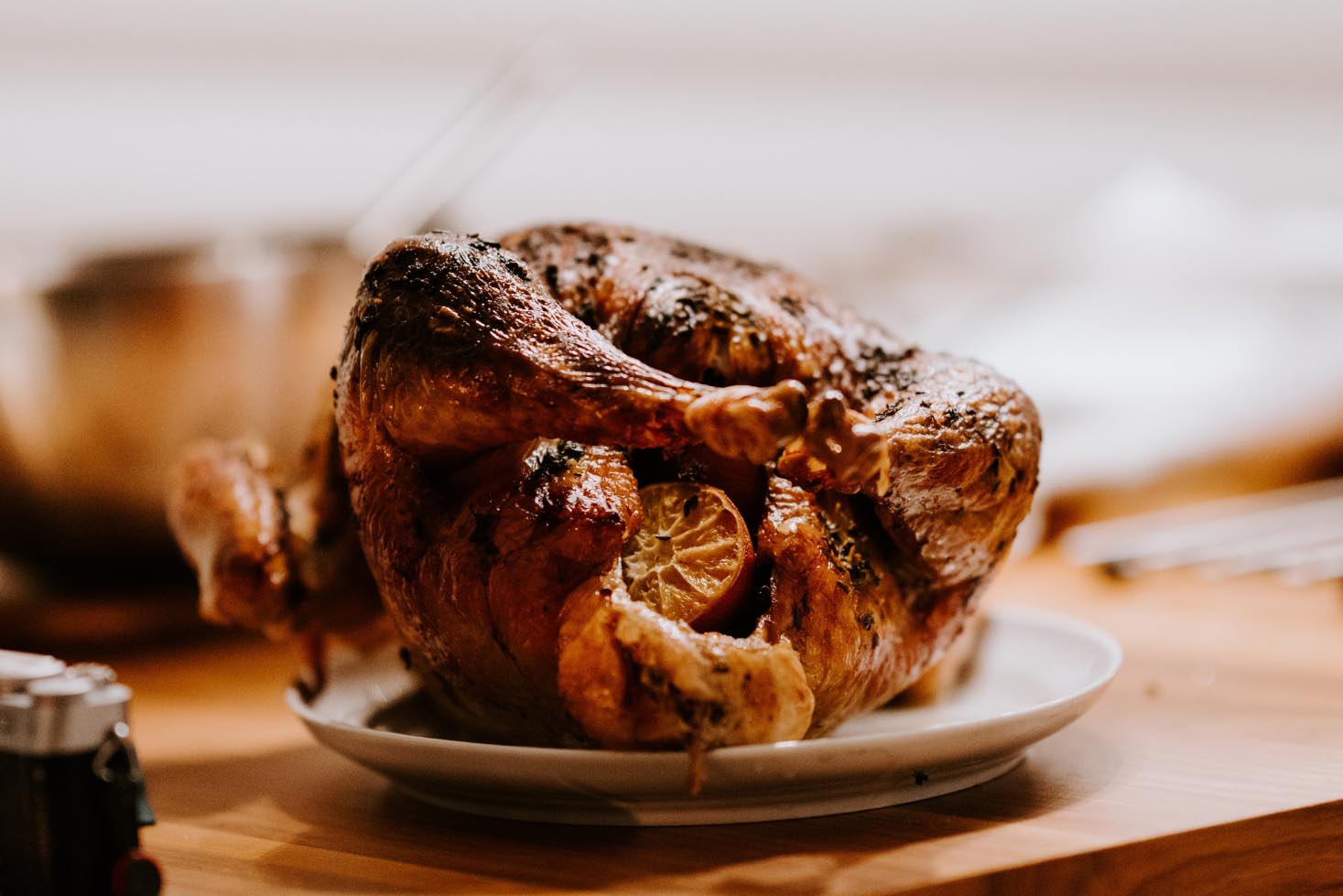 If either you or your family members have overindulged and felt tired on Thanksgiving day before, you may have blamed the bird — the common belief being that the turkey you eat, which is loaded with tryptophan, makes you drowsy.

But is it true? What’s actually happening at a biochemical level when you’re experiencing sleepiness post-Thanksgiving feast?

Interestingly, science suggests that your annual Thanksgiving nap might not be a byproduct of the tryptophan in your turkey, but rather thanks to a rich meal high in carbohydrates.

Why Do We Believe Turkey Makes Us Sleepy?

Turkey allegedly causes drowsiness because it is packed with the amino acid tryptophan, one of the building blocks of protein. Tryptophan is an essential amino acid, which means it cannot be created by the body and must be taken in through our diet.

When we consume tryptophan, it is broken down and converted into a molecule called 5-HTP (5-hydroxytryptophan), which is used to make serotonin and melatonin. (Source)

If there is a higher ratio of tryptophan to these large amino acids, then it will successfully pass the blood–brain barrier and get converted into serotonin via an amino acid enzyme. Serotonin in the brain can then be used to make the sleep-promoting hormone melatonin, which is also important for circadian rhythm and glucose regulation. (Source)

While evidence suggests tryptophan may increase our sleep time and efficiency and decrease the amount of time it takes to fall asleep (Source), this is largely dependent on the ability of the amino acid to cross the blood–brain barrier, along with subsequent biochemical reactions, so eating turkey doesn’t necessarily translate to increased serotonin and melatonin production.

Why Do We Get Sleepy After Thanksgiving Dinner?

So if turkey isn’t the culprit, what causes the drowsy post-meal feeling?

Evidence suggests your post-meal lethargic state on Thanksgiving might have more to do with what else is on your plate — in particular, carbohydrates (looking at you, sweet potato casserole).

Consuming high-glycemic-index carbohydrates, like a slice of pumpkin pie, increases blood glucose levels and triggers the release of the hormone insulin. Insulin promotes the uptake of glucose and amino acids other than tryptophan into the tissues. By removing the other competition from the blood, tryptophan has clear access to the transport system and is able to easily bypass the blood–brain barrier, eventually increasing serotonin synthesis. (Source, Source)

In this way, a heavy meal rich in carbohydrates may result in drowsiness by increasing the production of serotonin and sleep-promoting melatonin in the brain.

Studies have examined both acute and chronic effects of high carbohydrate diets on the feeling of fatigue and how quickly it comes on.

Although the results of these studies have been mixed, the researchers in one 2010 review suggest there is an association between simple carbohydrate consumption and fatigue — with participants who ate fewer or no simple carbohydrates experiencing less fatigue. (Source)

On top of that, other factors may contribute to post-Thanksgiving meal drowsiness, including our bodies’ transition into the parasympathetic state. In contrast to the “fight or flight” sympathetic state, the parasympathetic nervous system supports energy conservation by slowing the heart rate and blood pressure, and regulates digestion by increasing intestinal activity required for this process. (Source)

Studies continue to confirm the idea that a large meal is typically followed by a period to “rest and digest.” In the parasympathetic state, more blood is routed to the gastrointestinal tract to support digestion, meaning that less is allocated for the brain. Overeating can cause the stomach to expand beyond its normal size to adjust for the amount of food, which can cause you to feel sluggish or drowsy. In addition, protein and fat take longer to digest and exit the stomach than carbohydrates, which can leave you feeling (uncomfortably) full for longer. (Source, Source, Souce)

What Should I Do to Avoid a Thanksgiving Food Coma?

Eat your meal in an orderly fashion. Eating macronutrients in order may help minimize the effect on your blood sugar levels. In one study, participants were fed the same meal on two separate occasions — once with proteins and vegetables first, and the other with carbohydrates first. Eating protein and veggies first resulted in a 37% decrease in post-meal glucose levels after an hour. Researchers suggest that eating protein and vegetables first may prime the body to make a hormone, GLP-1 (glucagon-like peptide), which stimulates insulin production and inhibits glucose production. Prioritizing high-fiber foods (like vegetables, fruits, and whole grains) and protein can stabilize blood sugar levels, increase satiety, and curb cravings. (Source)

Put your fork down between bites. One potential contributor to overeating is consuming your Thanksgiving meal too quickly. In a 2014 study, researchers found that increasing the number of chews during meals can reduce the speed at which people eat as well as overall food intake. On average, once your stomach is full it typically takes 20 minutes for the "full" signal to reach your brain, which means it's possible to eat far more than you need in one sitting. The key is to take small bites, chew thoroughly, and put your silverware down between bites. (Source)

Eat stuffing — don't eat until you're stuffed. One study from 2015 discovered that when people had larger plates, they consistently consumed more food than those using smaller plates. This is thanks to the Delboeuf Illusion, a visual illusion that occurs because people judge the size of an object based on its surrounding context. When a large plate is placed in front of us, we automatically assume that the portion of food on the plate is smaller than it actually is. Sticking to a smaller plate at dinner increases the likelihood that you’ll consume smaller portions. If you're still hungry after waiting 20 minutes, don't be afraid to go for (moderate) seconds. (Source)

Go for a post-meal stroll. Walking is a great low-impact activity to help you stay healthy in general, but can be used strategically to circumvent a food coma. Although walking has beneficial effects on your health at any time of day, research has shown that taking a stroll after a meal may be particularly effective for supporting digestion and managing blood glucose. No need for a lengthy hike either — several studies have found that walking for at least 20 minutes after a meal can significantly reduce elevation in blood sugar levels. (Source)

Drink ginger tea. Several herbal teas, including ginger, have been shown to promote digestion and help counteract some of the side effects of overindulging. Evidence suggests that two compounds found in ginger, known as gingerols and shogaols, may help stimulate stomach contractions and emptying. Pour yourself a cup of tea at the end of the meal to get your digestive juices flowing. (Source, Source, Source)

Does Turkey Make You Sleepy? Debunking the Thanksgiving Myth

Does turkey make you sleepy? Turkey allegedly causes drowsiness because it is packed with the amino acid tryptophan, one of the building blocks of protein.